The latest version of the Samsung Gear S3 Smartwatch has us excited about the smart watch space again. The Samsung Gear S3comes in bigger, bolder, and offers more features than its predecessor, the Gear S2.

Some new features to expect with the Gear S3 include a built-in GPS, a larger 380mAh battery that results in an impressive battery life and built-in speakers and microphone to make and receive wrist calls.

Currently, there are two different Gear S3 models, the smoother Classic and the rugged Frontier edition. You might be wondering, which one is the better version? In terms of function, they have no difference because they both use the same Tizen version of the operating system. However, when it comes to design, they are quite different.

The Gear S3 Classic has a sleek and more polished design that makes it look more professional and business-like. On the other hand, the Frontier has a rugged and masculine design which makes it have an outdoors person look to it. The Frontier also is 5 grams heavier than the Classic at 62 grams.

Even though Samsung’s unique OS, Tizen is a great addition to Android Wear, it limits the number of Apps you would enjoy on a smart watch. Another drawback is that the watch appears bulky on smaller wrists. It also snugs on your upper cuff if you wear long sleeve shirts.

Is there enough substance behind the Gear S3 to make you join the cause? Let us find out in this full review of the Samsung Gear watch.

The body case measures 46 x 12.9 x 49mm which makes it thicker than a smartphone. This is because it is fitted with a 380mAh battery that offers a long lasting battery life of three to four days. However, this huge size may not appeal to everyone.

Its stainless steel case and rotating bezel bring a touch of class to the Samsung Gear S3. The rotating bezel is more than a pretty face, you spin it to scroll through different notifications and widget screens. There are also two dedicated buttons on the right side for back and home functions. 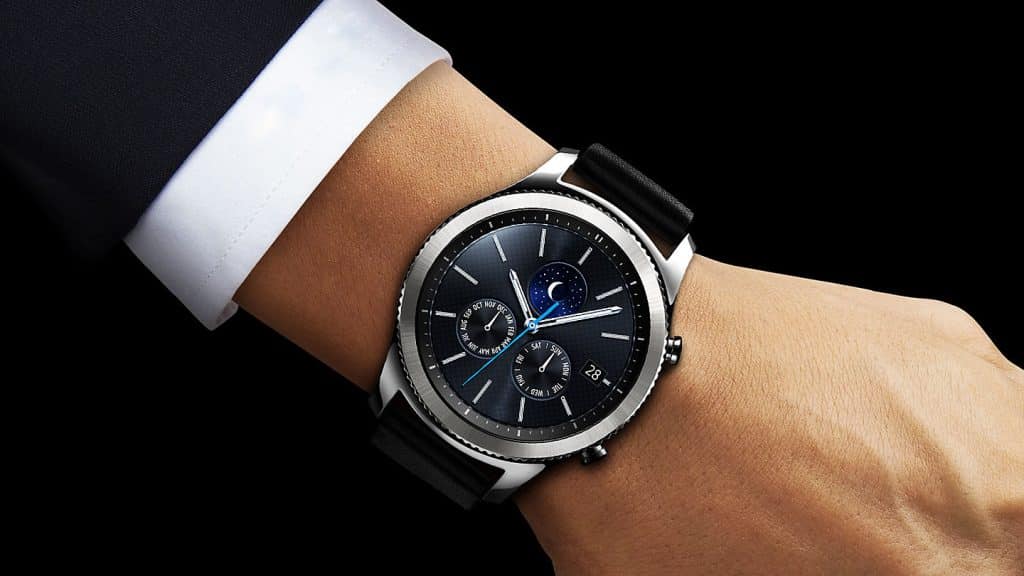 The Gear S3 boasts a 1.3 inches AMOLED display with a resolution of 360 x 360. This makes the screen bright and the colors vivid even under direct sunlight. Its exterior has a coat of Corning Gorilla Glass Scratch Resistance Plus to protect it against shattering and annoying scratches.

The Gear S3 offers an “Always-on” display that means the watch face is always visible to read even when not active. It automatically goes dim in low light environments so it will not irritate your eyes when you wake up in the middle of the night.

The Gear S3 unlocks new capabilities from its predecessors. It features a built-in GPS receiver that comes in handy for runners who hate carrying their smartphones.

Another new addition is the built-in speaker and microphone that enables you to make an answer calls from your wrist. However, this works best with a Bluetooth headphone because it is not loud enough.

The Gear S3 provides several messaging options like typing, tracing or dictating responses to text messages. Another incredible feature for peace of mind is the SOS triple tap. You select ahead of time your emergency contacts and choose if you want them to receive a text or phone call from you. In the event that you are involved in an accident and cannot reach your phone, you just reach for your wrist and tap three times to activate the SOS function.

You can enable Samsung Pay through an add-on that gets installed in the Gear Manager. This makes paying for items across major stores easy.

You no longer have to worry when you forget your phone at home. The 4G LTE enabled version comes with the ability to sync up the watch without needing to be tethered to your smartphone.

The Gear S3 battery allows wireless charging through a magnetic charging duct. Depending on how you use it, the Gear S3 can last up to 5 days with minimal usage and 2 days with frequent use.

The Gear S3 has incredible health-based widgets that show steps taken, calories burned, heart rate, recent sleep record, glasses of water and cups of coffee consumed. It also has an altimeter and barometer for hikers. There is a Spotify remote controller app and a Facer app to help you customize your watch faces.

It operates on Tizen OS that can connect to Android and iOS smartphones but the OS limits its app capabilities.

The Gear S3 runs on a dual-core Samsung Exynos 7270 chip that keeps things flowing smoothly. It tends to stutter with demanding games but when checking notifications, using fitness features and navigating the interface, it is effortlessly responsive.

Even though Tizen’s app ecosystem has grown since the Samsung Gear S2, there are still issues with the third party app development. Spotify announced that you can now save offline playlists to the device but other key players like Google and Facebook have yet to make an appearance.

The core apps and capabilities of the Gear S3 are so good that it is worth the asking price even without the third party apps. Its fitness and notification features are impressive and it combines all these with a long-lasting battery life and a high-end design.

For those reasons, I would recommend it as one of the best smart watches for men. It is an ideal option for those looking for an Apple Watch alternative and those who own an Android smartphone and want to invest in a good smart watch. 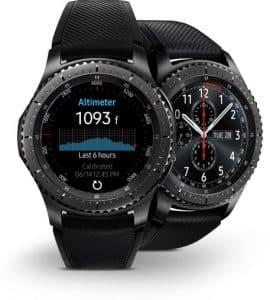