The Suunto Core outdoor sports watch doesn’t pretend to be anything else than what it is. The watch is a feature-packed outdoor companion that provides users with all the information

they need. Although the Suunto Core Altimeter Sports Watch doesn’t have any built-in GPS functionality, the watch makes up for it with its advanced outdoor features. Instead of relying on satellites, the watch measures pressure to calculate altitude. This provides a lot of advantages for users. The watch features year-long battery life and altimeter functionality. The altimeter also functions in sheltered areas without direct line of sight to GSP satellites. Something that is not possible with traditional GPS sensors.

The look of the outdoor sports watch is very utilitarian, but the Suunto Core can take any kind of abuse. It is as tough as it looks with quality materials such as mineral crystals and tough plastic all incorporated into the rugged design. This concept is consistent with the watch’s interface, which has a simple layout of menu icons that are large and easy-to-read. The readability of the display may not be at par with some of its competitors, but the watch is still quite legible even in low-light conditions.

The Suunto Core excels at providing users with different data that is relevant to their different activities. The watch boasts a long list of outdoor features. This includes a built-in barometric altimeter, storm alarm, digital compass, sunrise/sunset times, and a depth sensor. The watch’s barometric altimeter is accurate up to 29,500 feet. Water sports enthusiast will also appreciate the built-in depth sensor, which reads up to 30 feet under water. One of the biggest highlights of the Suunto Core is its barometric altimeter, which detects weather changes. Even without a built-in GPS feature, adventurers can still make do with the watch’s digital compass and altimeter. These sensors can still accurately pinpoint their location. Users can also use the watch’s rotating bezel ring to lock in their bearing. The outdoor sports watch also features a built-in thermometer. The sensor can detect temperature changes from -5F to 140 Fahrenheit. But, users will have to remove the watch from their wrist to get an accurate reading. Another useful feature is the watch’s sunrise and sunset prediction based on the user’s location. The watch features an extremely long battery life as it doesn’t need to constantly communicate with GPS satellites. The Core uses a common CR2032 battery that essentially lasts up to a year without being changed. This feat is otherwise impossible if the watch were to include a GPS sensor.

Users looking for the best wearable altimeter in the market will undoubtedly want to check out the Suunto Core for their next adventure. The watch features a myriad of useful features both for trekking and shallow diving. The easy-to-use and properly labeled interface, with accurate graphs, is also a welcomed feature. The Suunto Core may not be a head turner like its other competitors, but it will definitely get the job done. 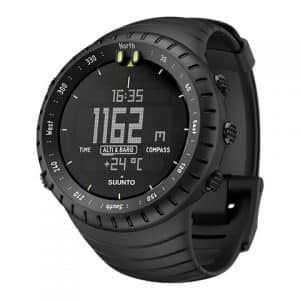