Oh, here we go, another pocket knife, right? WRONG! This titanium cut micro blade EDC pocket knife is cut above the rest. While there are many high-quality pocket knives already out there, this one has the potential to be the bellwether in the EDC Category.

The primary draw to this product is the combination of its very inconspicuous look and its keychain integration. Hanging off whatever kye chain you already possess, it will hardly be in your way. Your car keys will be more of an obstruction than this thinly crafted, yet durable tool.

Features/Pros – Let’s Get to the Good Stuff

Looks can be deceiving and when you first lay eyes on it, it seems like just another tchotchke item you will get for your dear old dad on his birthday. While it may be a present for his birthday, it sure won’t be just another side dish to his main course; it will be the filet mignon.

The ease and accessibility begin with the size and at a welcoming 3.75″ opened, it sure serves its purpose in that regard. However, the excellent feature is that it is only 2.24″ when closed; hardly bigger than a large paper clip. Slip it in your pocket, put it on your key-chain, stick it in your bait and tackle box; there is really no place you couldn’t make the WESN knife fit. Which begs a mention of why it’s called the WESN knife in the first place. WESN stands for the cardinal directions, consisting of West, East, South, North — meaning, you can bring it anywhere you can go without trouble.

Okay, maybe it’ll do its job, but for how long? It’s rare that you find a good product that has carefully chosen quality materials at affordable prices. The gentlemen who designed this didn’t skimp on quality. The WESN is built with grade 5 titanium and AUS8 steel. If you know anything about grade 5 titanium, it accounts for 50% of the total titanium usage, globally. That’s because it’s some of the strongest titanium in the world, yet still maintains a lightweight; a primary expectation when the founder of WESN designed this knife. AUS8 steel has the draw of its popularity among the military and police forces. This type of steel is also cheap to make since it’s manufactured in Japan, instead of the US. 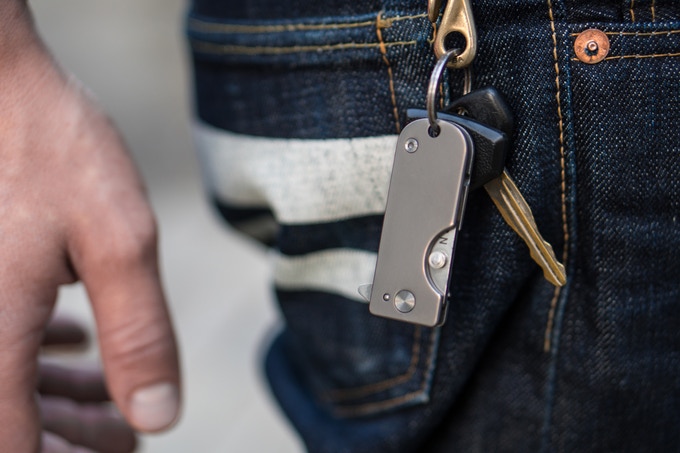 The designer believes so much in this knife that it has a lifetime warranty so that you can always get a replacement if something affecting its utility.

The WESN knife has a virtually unlimited everyday use. The main features that contribute to its utility are an upswept tip, its double edge on the blade, and compound grind. Because of these carefully thought out details, it can be used for everything from caving wood, striking flint, cutting fruit when camping or even opening an ice-cold bottle of beer. Many guys or gals out there who are EDC knife carriers enjoy being the useful type who always come prepared. But they always get a chuckle for whipping out a 5 to 6 inches pocket blade like they just came from boar hunting.

Seems like the perfect tool to give someone this holiday season; just make sure they open it at the beginning of the present opening! 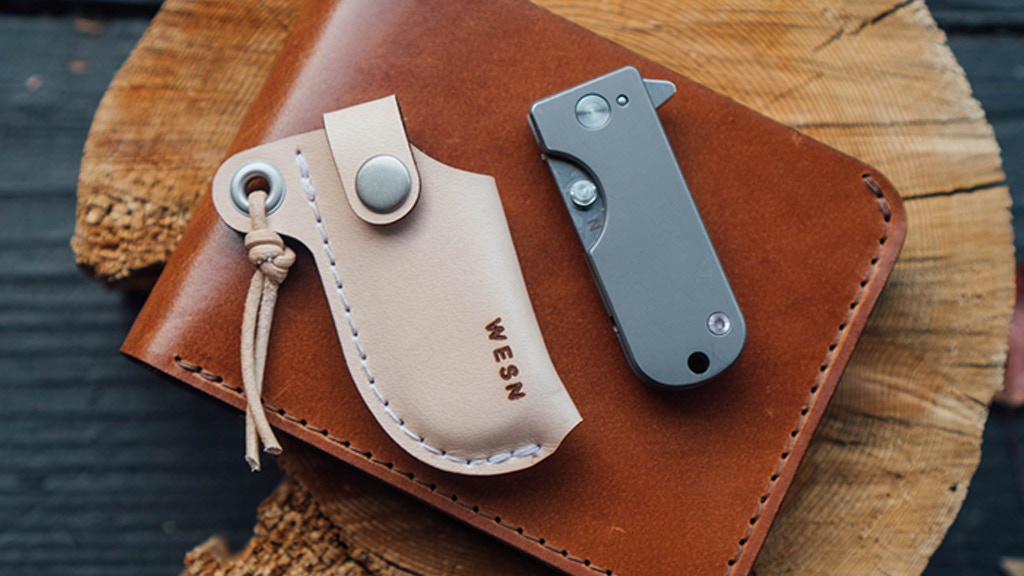 The knife while appealing to the masses for its practicality, comes with a ball detent which helps keep it in place. This means that it is not spring loaded when opening it and will require some force to open it. Not too much of a hindrance, except that you won’t be able to open it with one hand if your hands are full.

Many customers have shown a desire for getting rid of the clip that comes with the knife. Albeit, very small, some ave argues that it takes away from the sleekness of carrying it in close quarter areas like shirt pockets or even Altoid cans, according to one particular review.

If you decide to purchase the leather sheath that can hold the knife as an alternative carrying method to a keychain, you will have to carry it in a pocket. Again, nothing that’s going to affect the small size and discreet appearance, but the leather sheath does not come with any piece that could attach on to a belt or key hook. the sheath is mainly for the look and a little extra protection.

At this point, the blade comes standard with a knife that’s eligible for an upgraded blade. The problem with that is you will pay an extra $20 for the upgrade which many feels is a bit high for an already strong investment for such a small EDC knife. It’s cheaper than other everyday carry knives like the Kershaw Blur and Spyderco Delica4 Lightweight FRN Flat Ground PlainEdge Knife (Gray), but would be at the same price point if you get the upgraded blade. From the comments, there appears to have been many requests for upgraded steel, portending to surpass the current AUS8. One naturally must question what, if any, notable differences would show. This hasn’t been clarified from the designer’s response to comments but was mentioned by one person who seemed knowledgeable on the topic. The upgrade to the SV30 steel seems to hold not much more of a difference than a longer blade, which makes it harder to sharpen and more prone to damage.

One last shortcoming the WESN face when compared to other similar products like Spyderco, Bench made, Ontario and Kershaw, is the grip. It is just the steel that you seem to be holding on to when using the knife, so your hand may get slippery if you sweat a lot, when cutting for several minutes. Although, I suspect that the reason this knife was designed was for short one-off occurrences when you normally aren’t prepared, carrying a knife.

It seems that the designer and founder has found a nice niche to sell his WESN micro blade EDC knife. Customers really seem to be reacting to it positively in their appearance, growing need, and desire for such a small, sleek locking knife. While it’s hard to tell so early on if the price of $35 is worth this small pocket blade, judging by the competitors, it seems like less of a rick to purchase and try it out. There aren’t so many reviews seem to high-five the keychain component comfortable enough to openly carry it everywhere.

Personally, I wouldn’t carry the WESN knife in its Stock and Barrel sheath as it somewhat counter-intuitive to its thin and unobtrusive body. While I do feel that is a nice holder and enjoy quality products like it, I as well as many other customers wouldn’t pay another $35 just to have a luxury knife holder.

I must admit, another large draw to this product is not just the quality of the knife itself, but the person behind it. The Designer, Billy Cheaster comes from a product design background and really seems to have done his homework on creating a product with such high demand. In fact, there weren’t any questions that I could find in reviews that he didn’t have at least a satisfactory answer. Despite his pleasant surprise by the positive reaction and interest to the WESN, he would expect it to rise in the near term around the $50 mark with its growing popularity. Luckily, it doesn’t sound like he plans on switch manufacturing away from offshoring locations, so the price should only rise due to growing margins. I would also expect that once it gets to a certain number of knives sold, Billy will likely make the knife come standard with the SC30 steel, permanently replacing the current AUs8 material now. This will obviously factor into the newly calculated price, but not significantly in the long term once the product is scaled down.

Finally, it seems that with the growing amount of inquiry into the movement of the blade, from the closed position to open, the creator will act on that as well in the future. As previously mentioned, it is a manual action to open the blade and it seems that it is more common than not to have a pocket knife with some sort of spring-loaded mechanism to open. This is purely nitpicking at this point, as it is a quality every day carrying knife that hit the hail on the head on the quality of materials and ease of use. I would buy a few now before the price goes up, as there are some early bird deals still available before demand gets overwhelming. 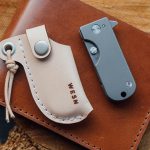 One thought on “The Kickstarter WESN Micro Blade Review”