Hello to all visitors to my website. Today I have an amazing surprise for you! By the way, I have met the future and her name is Alexa Dot.

So what is the Alexa Dot?

I will be talking in this article about Amazon’s voice activated technology. It’s simply a hands-free, voice activated small device with a built-in speaker. In fact Alexa Dot can do all kinds of cool things, like playing music, providing informations, news, weather and more instantly.

Aexa was the following Success in the launch of the first model and rival competition from Google Home, so Amazon unveiled the second-generation of this released in 2016.

Setting up Dot could not be easier, all one needs to do is to download Alexa which is a freely available for IOS, Android and Fire OS and PC browsers. Once done open the app and follow the step by step directions that will enable you to establish a connection to the Wifi network.

The Dot stands at 1.3 inches tall, a fraction of the original Echo, making it almost impossible to tip over. It is available in black or white in color allowing it to suit any environment hence you can place it almost anywhere in the house. The Echo Dot is a sleek product, it does not have the volume ring, unlike earlier versions it has two additional buttons at the top fitted for volume control. Its small size allows easy portability since it can be tucked anywhere.

The numerous skills also referred to as third-party add-on features incorporated within the Alexa platform give Amazon a distinct advantage over Google’s Home speakers. Currently, it supports most popular Smart home devices from companies such as Philips Hue, Smart things, Nest among others. Platforms bring supported include Ecobee and Honeywell, it also works with recipe and travel apps allowing the owner to order flowers, Pizza or a car. One has access to bank balances and can get news briefings from the various media houses such as AP, FOX, and NPR. 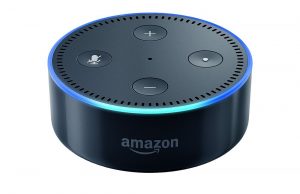 Competing devices — The comparison between Alexa Dot and Google’s Home

There have been rumors that an Apple device is set to be unveiled but until then the only device posing a real challenge to Alexa’s dominance is the forthcoming Google Home. The Home device allows audio casting for multiple devices supporting Google’s video streaming and audio service while the Dot can only send music to a single device. Alexa, on the other hand, supports over 13 connected home platforms while Google’s Home device works with only four developers and manufacturers.

It is not advised to have two Alexa’s in the room, the Echo Spatial perception feature determines the device that hears you best and communicates only with that piece of hardware.

So what is the Amazon Echo sound quality?

A review on Alexa indicates that the Dot maintains the exceptional ability to recognize voices allowing for an option to improve sound quality by providing an external speaker. The only challenge posed by the second generation is that the external speakers are not always meant to be always on devices, one has to devise whether to rely on Dot’s tiny internal speaker or leave it on the speaker that is left permanently on. 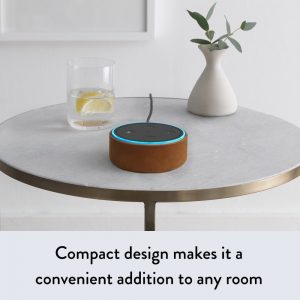 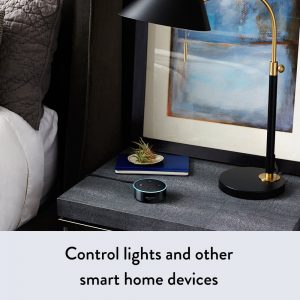 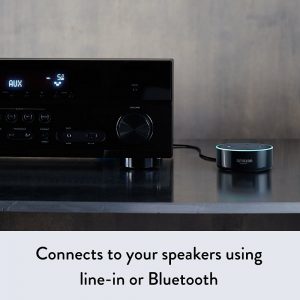 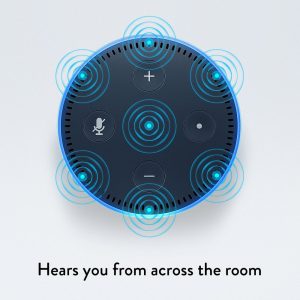 The process becomes more seamless while using Bluetooth to connect Dot to an external speaker, in this case, one can easily instruct Alexa to connect allowing an automatic connection to the last paired device.

The second generation Echo Dot has a lot packed into the tiny package, it comes with similar excellent voice recognition chops to the full-size Echo dispensing the bulky speaker that most people agree were not the best experience for intense music-listening, to begin with.

Echo Dot going for $50 can do more than the other devices which are more expensive, it may not produce high-quality music compared to genuine multi-room audio due to sound reproduction a quick fix for this would be to pair it up with a self-amplified speaker using either cable or Bluetooth.

The Dot is much smaller but has similar traits to other powerful versions of Amazon Echo. It comes shortly only on the internal speaker of which it compensates for with Bluetooth connectivity and an audio-out port.

The inability to query for a single Alexa device in close proximity at times may be annoying and a shortcoming for the second-generation Amazon echo dot. A review of Alexa shows that its usefulness and slashed price make the Dot a favorite option for those intending to build a connected home at an economic scale.