With so many drones to choose from, it can be quite a daunting task to find the right one to buy. There are of course a lot of specific uses for drones, like racing or aerial photography. In this article, we are going to look at the best drones in the market that cost less than $300. This will automatically exclude the high-end drones, such as the ones from DJI. However, the competition for low to mid-end drones is still very high. This means that there are still a lot of options out there.

The most important things to consider when buying a drone, aside from its price, are its flight time, range, features, and camera quality. The average flight time for a good quality drone is around 12 to 20 minutes. Some products will offer more, which is a good selling factor. Drones with flight times below average can be problematic as it will require users to constantly charge their batteries. The range is also an important factor to consider as it can be a limiting factor for users. Average control range for good quality drones is around 200 to 500 meters. But, there are some manufacturers that offer products that can go as far as 1,000 meters.

Performance generally includes the drone’s stability, controls, and its speed. Over the past few years, drone manufacturers have gradually improved these capabilities. This is mainly thanks to advances in drone technology and miniaturization. Even drones under $300 offer very impressive performance. Lastly, buyers should consider the drone’s added features. This may include features such as GPS, flight modes, camera modes, auto return, auto landing, and other add-ons.

Here is a breakdown of the specs of the drones on our list:

An Easy-to-use and Feature-rich Drone for Aerial Adventures 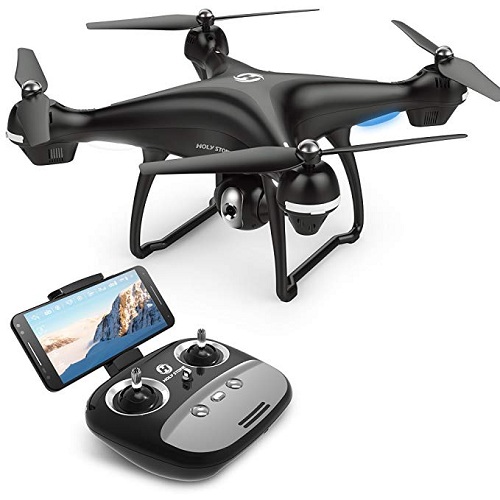 The HS100 is Holy Stone’s best selling drone, and for good reason. The simple to control drone is for outdoor enthusiasts who like to capture an aerial view of their adventures.

This drone from Holy Stone is currently one of its best selling products. It offers quite a lot of features considered its sub $300 price tag. Users can enjoy using this product for up to 15 minutes, which is thanks to its included 7.4 volts 2,500mAh battery. The HS100 also features a maximum control range of 500, which is way better than most other drones.

Captured photos and videos are also excellent, thanks to its 720p camera. The camera also has a wide 120-degree field of view, which means that it can capture quite a lot of scenery. Users can also adjust the camera’s angle up to 90 degrees. This is especially useful for First Person View (FPV) flights. The HS100 also offers loads of built-in features, which is more than we can say for other more expensive products. The HS100 offers GPS-assisted flight modes.

This includes an Auto-Return function that safely and accurately guides the drone to its starting point. The Follow Me mode is also useful for users who want to capture their holiday adventures and outdoors treks. Other features include Headless Mode, Auto Takeoff and Landing, VR compatibility, and Altitude Hold. 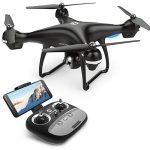 The Holy Stone HS100 is easy to use and easy to fly, which makes it a great drone for beginners who want to start their aerial photo and video careers. It is an incredible aircraft that is very maneuverable and stable. For this reason, the HS100 is a great companion for sporting events and outdoor adventures.

A Fast and Furious Drone for Intermediate and Expert Racers 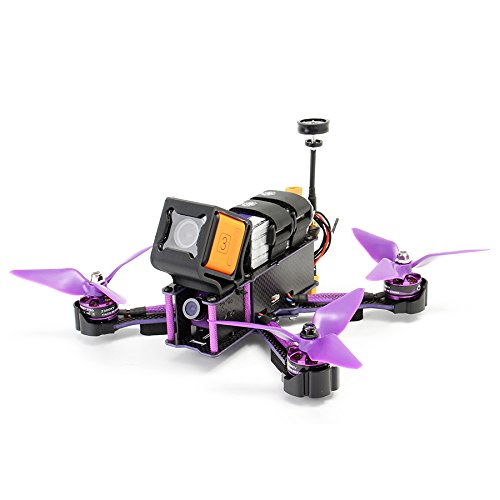 The Wizard X220S is a serious racing drone that accelerates fast and turns just as quickly. At just under $300, amateur drone racing enthusiasts may want to consider getting this product to start their racing careers.

The Eachine Wizard X220S is a great amateur racing drone that is relatively cheap to purchase. Users who are on a budget and want to get into amateur drone racing will find no other product better than the X220S. This drone can enter into amateur competitions right out of the box, and at just under $300, that is saying a lot. Suffice it to say that given its very fast performance and responsive controls, this drone might not be for inexperienced flyers.

The Wizards X220S comes with a responsive NAZE32 6DOF REV6 flight controller, which is a great starting point for novice racers. The powerful 2205 2,300KV brushless motors offer a lot of performance for their size. The drone is capable of doing very tight turns and fast accelerations. This is mainly thanks to its incredibly stable Wizard 3 propeller blades. The X220S has a flight time of around 12 minutes on a single charge. It is also compatible with various FPV monitors and FPV Goggles.

When it comes to its flight features, the X220S may be lacking when compared to other products. This is mainly due to its race-centric nature. What it lacks in features, it does make up for in its racing hardware. The FlySky I6 2.4G 6-channel remote control and the Flysky 2.4G 6-channel FS-iA6B receiver makes the drone very responsive to user commands. 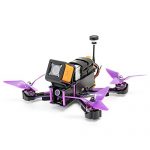 The X220S is perfect for flyers that are just starting out and are serious about racing. The drone itself is a great starting point as it is compatible with a wide range of parts and accessories. Parts are easily interchangeable, which means that it easy to modify.

A Fun and Good Quality Drone from a Well-known Brand 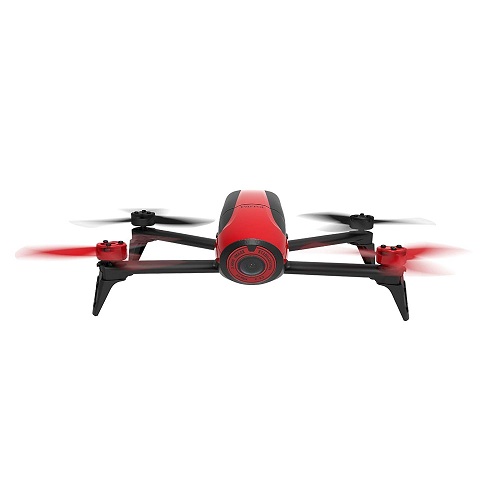 This smartphone-controlled drone is a bestseller for a very good reason. It is relatively easy to fly and with its 3-axis digital stabilization system, it is ideal for beginners.

The Parrot Bebop 2 is the successor to the original Bebop drone, which was very impressive during its launch. This drone really isn’t supposed to be on our list, given that a complete package would cost more than $300. However, there are deals online that are available that don’t include accessories. Without the remote control and FPV pack, users can purchase this particular drone for under $300. Even without the remote, the drone still performs very well using a smartphone.

This popular done sports a lot of advanced hardware and features that sets it apart from other products. For one, the primarily smartphone-controlled drone features a 14-megapixel camera. The onboard sensor can record videos in full HD 1080p resolutions. It also features a fisheye lens with 3-axis image stabilization. This produced very stable footage even during intense maneuvers. 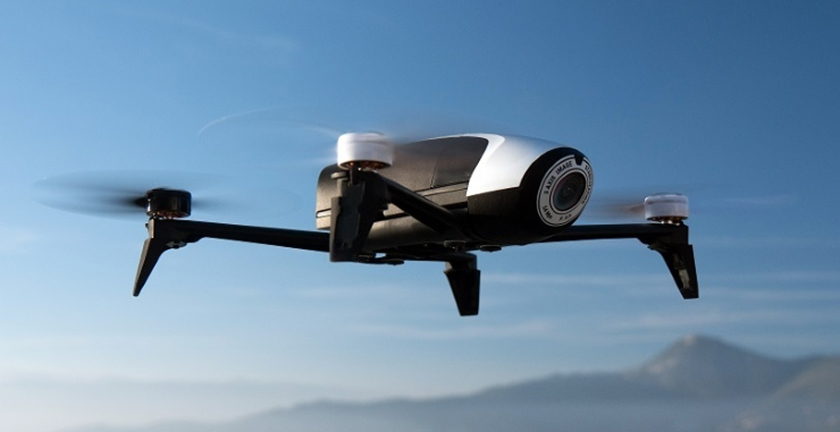 Those who have a little more money to spend can buy different accessories to get more out of the drone. The optional FPV pack includes a headset and professional flight controller. Getting the separate pack will offer users a more immersive experience. Users can also opt to purchase different software features, such as autonomous flight and flight planners, on the app itself. Even without the add-ons, the Parrot Bebop 2 is still a capable and good looking drone that is easy to operate. The drone should prove to be a great product for beginners. Novice flyers will appreciate its stability even during strong wind conditions. Stable flight is possible through the drone’s digital stabilization system. 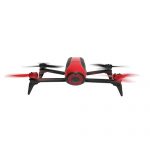 The Parrot Bebop 2 is one of the best-looking drones in the market. It is also easy and fun to use even for beginners. With so many features and a robust build, the Bebop 2 is great value for money.

The Best DJI Phantom Drone Copy in the Market 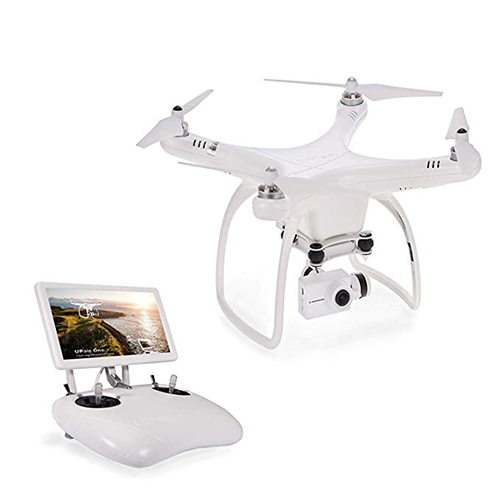 Unlike other drone copies, the Upair One is a reliable and robust product. It offers a plethora of features not found in other drones in its price range.

Similar to the smartphone market, the drone industry is full of copies that mimic the design of more popular brands. Most of these copies, unfortunately, do not possess the same features or quality of the products they are copying. The Upair One is clearly a knockoff of the popular DJI Phantom lineup of drones. However, it is far from being just another cheap copycat.

The Upair One offers users a number of great features that should make it an enjoyable experience for novice and expert flyers. The included controller even has a built-in 7-inch screen for FPV purposes. The Upair One also comes in two flavors, one with a 4K camera and another with a 2.7k unit on board. The camera transmits live video onto the 7-inch monitor on the controller without much latency.

Unlike other drones in its segment, the Upair One boasts an impressive 18-minute flight time, which is thanks to its powerful 5,400 mAh battery. As for its flight features, the Upair One offers them in spades. The drone features a full GPS lock, using up to 8 satellites, to pinpoint its exact location. Other features include position hold, altitude hold, and an automatic return function. 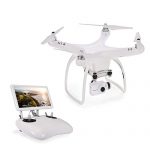 The Upair One is definitely a solid choice for people who are getting into aerial photography. At just a fraction of the price of other well-known brands, the drone offers the same relative features. There will be some sacrifices when it comes to its overall build quality. But users would likely not find another drone as good as the Upair One at this price point.

Greatest Bang for your Buck Smart Drone in the Market 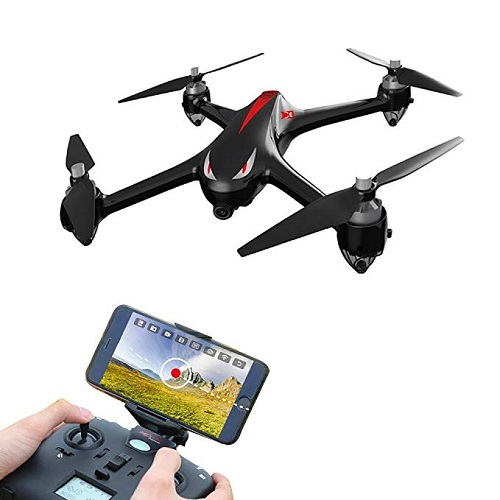 The MJX Bugs 2 offers users quite a lot given its entry-level price point. Compared to others drones, it features some very nifty tech and functionalities that make it a cut above the rest.

While there are hundreds of drones to choose from in the $200-$300 price range, none of them can compete with the MJX Bugs 2. The spiritual successor of the late Bug 3 offers a lot of exciting new changes and features. These changes greatly improve the affordable drone’s aerial photography capabilities. The drone is slightly smaller than its predecessor, but it packs quite a lot of new tech. For one, the drone sports a new 5MPX sensor that is capable of recording videos in full HD 1080p resolutions. It is definitely better than other drones within its price range.

The MJX Bug 2 also sports a built-in GPS+GLONASS Receiver that essentially makes it a very capable smart drone. The integrated GPS results in a number of very nifty flight feature such as automatic Altitude Hold and Return to Home. Its GPS-assisted features are also quite accurate when compare to its competitors. With these features, flyers can pull off smooth and precise cinematic aerial maneuvers. All of which results in fantastic looking footage.

Spec-wise, the MJX Bug 2 definitely does not disappoint. The drone actually sports an operating range of up to 1,000 meters. This is more than what other drones can offer in its price range. The drone can fly up to 18 minutes on a single charge, which is thanks to its massive 1,800mAh lithium battery. There isn’t a single drone in the market that offers the same caliber of specs as the MJX Bugs in its price range. MJX is definitely pushing the envelope with its latest product. By offering great hardware at an aggressively low price, MJX is currently leading the race. Others manufacturers would have to produce better products in the future just to catch up. 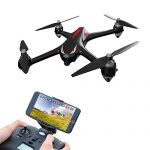 The MJX Bugs 2W Smart Drone is a steal at its sub-$300 price point. There is no other drone at this price range that offers the same reliability and features. Its impressive hardware specifications and its solid camera all contribute to a very capable aircraft. For this reason, the MJX Bugs 2W is perfect for novice and expert aerial photography enthusiasts alike.